Menu
Unpublished text by Marcel Meili about Quaderns in the 80s

There are several texts by Josep Lluís Mateo, which have aroused our special interest in Quaderns.
Texts about 1. technology (técnica y proyecto), 2. reality (realidad y proyecto), and 3. periphery (no existe el centro) (Eros & Tanatos) as well as the interview with Wim Wenders.

First and foremost, however, Quaderns was the network for architectural production in the Europe of the early 1980s, which particularly interested us. It introduced us to many architects who, like us, built their work on the ruins of a fading late modernism beyond postmodernism.
There seemed to be an appreciation for this new architecture in Europe and Spain that we felt close to without knowing all its protagonists. Mateo, whom we knew from Kollhoff’s Summer Academy of 1987, followed these traces in a way which also inspired us as to its theoretical approach and set out the critical concepts he held against the postmodernism still prevailing at that time.

We were particularly interested in two topics: “technology” and “periphery”. In the field of technology, his aversion to high-tech solutions and his fundamental interest in the solidity of technology attracted attention. His postulate of stating the epistemological properties of technology was not least interesting because it drew such a clear line to separate it from the modern enthusiasm for technology. According to this thesis, the field of technology was a field that particularly and directly challenged us to explore the project as a medium of the present.
For the unity of form and technique, he developed a non-romantic and non-naive way of reading, which attributed a series of almost autonomous forms of expression in an indispensable logical unity with the project to technology as a discipline. By reading technology first and foremost as a tectonic statement, the project was released from neomodern restrictions. At the same time, he criticized the almost ornamental approach to technology in recent architecture. And he denied the potential of technology as a source of optimism. The central concept remained the appropriateness of technology as part of the project: technology as part of the logical structure of the project, that is. He recognized early on what affected us most, namely, to see the material as an independent form of expression of technology. It was Quaderns that showed us the stupendous characteristics of the walls of, e.g., Bienefeld.

Even more important to us was however the term of “periphery”, which Mateo used in a nice metaphor to denote the absence of a centre in the sense of an architectural discourse no longer grouped around a central argument. This reading came close to our own vision because Quaderns always saw itself as a platform that refrained from providing an ideological centre for the proliferating contemporary architecture. Together with the technical understanding of the concept of reality in the article realidad y proyecto, the field was opened for a project that serves as a research and fever gauge of current reality. With the concept of the “new narrative”, Mateo borrowed a term from postmodernism and gave it a new meaning. His declared interest was in the vulgarity of everyday life and the dirt of the real. Together with the periphery, he thus defined the place where new realities brewed unfiltered by artificial discourses. This was also a thesis that particularly interested us in Switzerland. For us, the periphery has always been the place where, subliminally, the so-to-say depth psychology of our culture and the hidden basic currents of society, manifest themselves. At least more than they do in this basically tidy country, which simply levels any contradictions that become evident. My article “Ein Brief aus Zürich” [A Letter from Zurich] also focused on this issue and became the most widely quoted of my articles. A calculated reduction and dryness strove to avoid the pathetic exaggeration of this zone. The trivial and somewhat dirty thus took on a regulatory significance within the project. Not surprisingly, this argument mentions Robert Venturi – a figure who, alongside Aldo Rossi, was a landmark of our work.
The non-peripheral places were those places in which process and form were connected with spruced-up reason. What an interpretation!

Overall, the argument concludes in a refusal to acknowledge the hegemony of a single argument, but also in the concept of a project dedicated to the study of contemporary reality.
Mateo pleads for hard, dry, and cool approaches, which are inescapable mental states if reality is the measuring criterion of the project. The three articles bear witness to an author to whom nothing is more alien than neo-romanticism. In a wonderful little text (Eros & Tanatos), which is almost a poem, Mateo notes that architecture can monumentalize the moment when it uncompromisingly, coolly, and severely turns towards reality – recognizably so for anyone to whom time means nothing but eternity everything. An illustration of this idea can be found in the great interview with Wim Wenders!
And there is something else that adds to our fascination with Quaderns: the magazine had the most extraordinary typography of the world that, under the circumstances, was developed with the precision of a project and represented the realistic and factual spirit of the magazine in a visually perfect manner. This was not least conveyed by its layout and typography, which used beautiful fonts and the white of the pages, and with an imagery reminiscent of a film. The choice of images and their cadrage were, in themselves, already statements on the climate in which Quaderns’ theses were presented.

This project was developed before we even knew Quaderns. However, it soon became clear that the premises of this project and its peripheral and inelegant location, its elementary technology and its interest in a dirty reality were in very good hands given Quaderns’ mind-set.
The same, in fact, as the later published remodelling of the Grob textile factory. The programme developed for Stuag was quite elementary and inseparable from the industrial landscape to be found along almost every highway in Switzerland. Already the programmatic approach was wonderfully unexcited and pragmatic: it was all about designing a “staging post” for machines and materials for a large road-construction company, i.e. a storage area…
The place was near the highway, of course. But how could such a programme be provided with an emblematic, distinctive, and recognizable design in the midst of all these sheds and the piles of material of other companies? We opted for a silhouette that suspended the roof from two prefabricated rails, reminiscent of the crane runways of large metal depots. The main house was to be built of pieces of stone, leftover fragments of stone slabs for surfacing work.
An early form of recycling. The walls protecting the halls against rain were exclusively made of shrubs that do not allow rain to pass through. But the most important thing for us was that the depot was to actually look like a storage site – and that’s why the project literally breathes the dust of such places, without any jazzed-up artistic attitude.

Marcel Meili, text written in the frame of the exhibition “Unveiled Affinities: Quaderns in Europe” 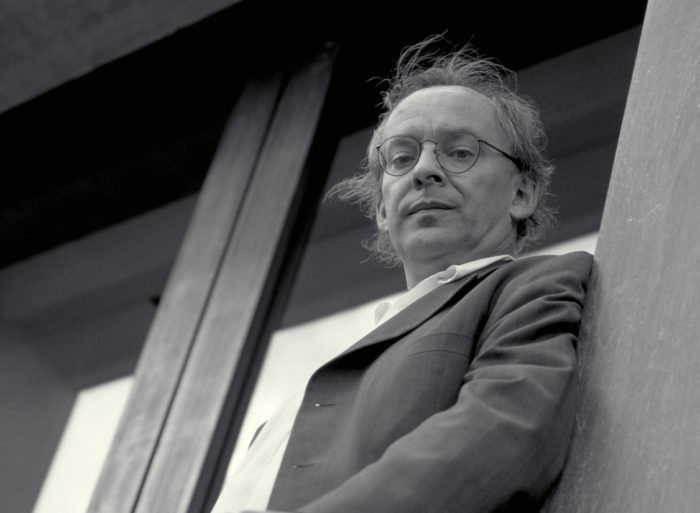 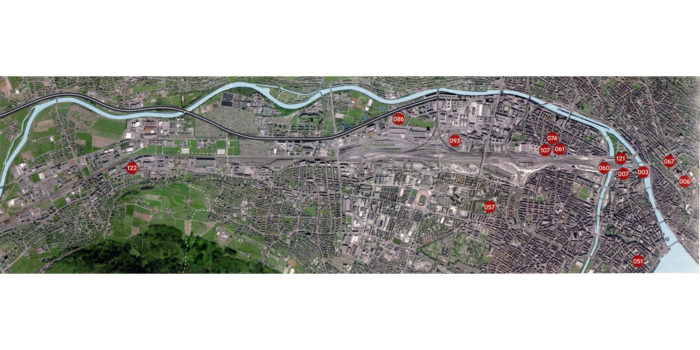 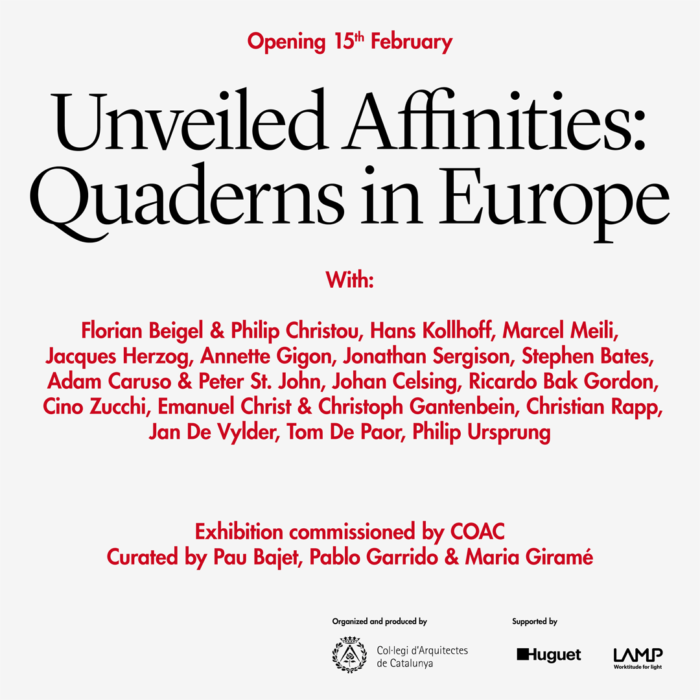